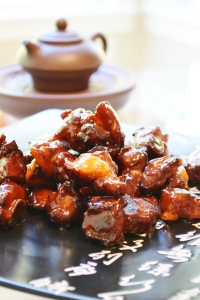 Chinese love the sweet and sour ribs, particularly in the south east part of the country. Each family has their own way of making it, but the main ingredients has always been sugar and vinigar, which is what makes the ribs sweet and sour. Korean chili paste is essential to most of the Korean dishes and I love it for its sweet and hot taste. I accidentally made up this new version when I had a kitchen disaster a year ago. My intend was to make a roasted duck but it came out not cooked that well. So in a hurry, I decided to cut up the duck into small pieces and fried them to crispy and then coated them with spicy sauce made of Korean Chili paste (which was what left in the fridge), sugar and soy. It was an instant hit. The roasted duck happen to cooked well this time, so I applied the same treatment on ribs instead. It passed the test of my Dad who has the most stubbon Chinese taste bud that I know. So I’ll call it a success.

Salt and pepper to taste

Marinate the ribs with the cooking wine, soy (save about 1 table spoon for later) and green onion for at least 1 hour in the fridge. Pat the ribs dry. Fry the ribs in the heated oil on medium heat until golden brown, about 10-15 minutes. Fish the ribs out. In another sauce pan, put in the sugar and water and cook until start to thicken up a little bit. Add in the chili paste and about 1 table spoon of the soy sauce. Stir until fully incorporated and finally add in the ribs to coat evenly

On a separate note, here is the birthday cupcake tower for Annabelle. The theme was music and under the sea. The Ariel candel went missing in action unfortuently, otherwise it would make the whole theme more complete 😦 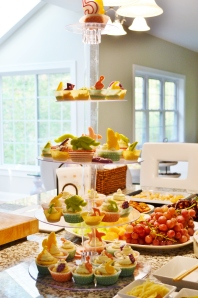